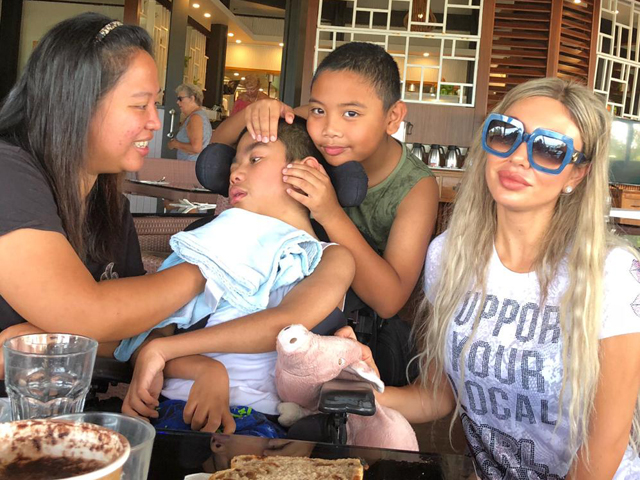 Whilst Nissy Nassif caught the attention of the Australian public earlier this year when her husband Jean posted a video of the yellow Lamborghini he had bought her, Nissy does so much more than wear designer clothes and drive a luxury car.

Amidst this social media storm, Nissy carried on with the incredible philanthropic pursuits of her charity, Wiping Tears. Since 2015, Nissy has been Director and CEO of the charity, which helps families in crisis due to illness and/or financial hardships.

13-year-old Matty was born with Cerebral Palsy to parents Monette and Ronaldo Saraza. Matty will be bound to a wheelchair for the rest of his life and can’t talk. His condition has meant left his parents with hospital bills in excess of $55,000. Day-to-day life is costly struggle for this family with additional expenses such as a wheelchair, nappies and the fact that Monette needs to be his full time caretaker.

When talking to a new friend from Broome about Wiping Tears and how they help individual families in need, Nissy was introduced to the Saraza family who were members of a local church that her friend attended. Upon hearing their heartbreaking story and daily struggles, she boarded a flight to Perth to visit them and hear their story.

Nissy commented: “I feel because I have been so blessed, I am in a position to help others, so I must. Matty can’t speak or communicate so he often gets frustrated. But while I spent time with him he was such a smiley boy. It broke my heart to see how much hardship his family was going through. Yet they continue to remain positive.”

“I’m lucky enough to have a network of generous friends who donate to Wiping Tears and I would urge others to do the same. The Saraza family is one of many that we help, offering them assistance based on their individual situation,” she continued.

Wiping Tears has since paid off Matty’s hospital bills, paid the remainder of the family’s car payments, given them $1,000 in Coles vouchers to assist with daily expenses and $1,000 cash.

Nissy added: “Broome is known as a stunning holiday destination, but sadly this and mining have increased the cost of living so dramatically that a vast amount of the population are living in poverty, which often causes other mental health issues such as substance dependence, depression and suicide.

I met a young boy who would have been no older than and he told me he preferred to be in jail because at least he had a roof over his head and had regular meals,” she said.

Earlier this year, the Government release data showing that if the Kimberley region was a country – and with an area of half a million square kilometres it’s big enough to be one – it would have the worst suicide rate in the world. According to the World Health Organisation, the region has the highest suicide rates in Australia.

The Sydney based charity will continue to work with families in Broome and other impoverished regional areas of Australia.

One thought on “Nissy Nassif helps Broome family in crisis”